Bowel Sounds: What Could They Indicate About Your Stomach?

Bowel sounds, more commonly known as stomach churning or growling, are the noises often produced by your small and large intestines. A noisy tummy is an entirely natural process of normal digestion and doesn’t indicate any significant gastrointestinal conditions or diseases. However, in some instances, loud, frequent and abnormal bowel sounds may be a point of concern for your gastrointestinal health.

In this informative guide, The Centre for Gastrointestinal Health explains the different types of bowel sounds and their meaning, helping you identify instances where medical intervention may be necessary.

What’s on this page:

Where is the Bowel Located?

The bowel, also known as the gastrointestinal tract (gi tract), is a critical part of our digestive system as its primary role is to process nutrients and minerals from consumed foods before expelling the waste products. Our bowels are long and hollow tubes that are split into two sections, these being the:

Why Does My Stomach Rumble?

The abdominal sound you hear is caused by your intestinal muscles pushing food through its hollow tubes, creating a deep echoing noise as a result.

No matter your age, sex or diet, we all experience some form of bowel sounds. However, some noises may be more severe than others, indicating potential issues with your gastrointestinal tract.

The following section will break down the different sounds heard from the bowel and identify specific areas for concern that may require a medical examination.

While some bowel sounds indicate a healthy digestive system, others signify potential gastrointestinal disorders and diseases. When it comes to classifying bowel sounds, there are three distinct types:

If you want to gain a deeper insight into your gut health, it’s essential to understand these different types of sounds and their meanings. 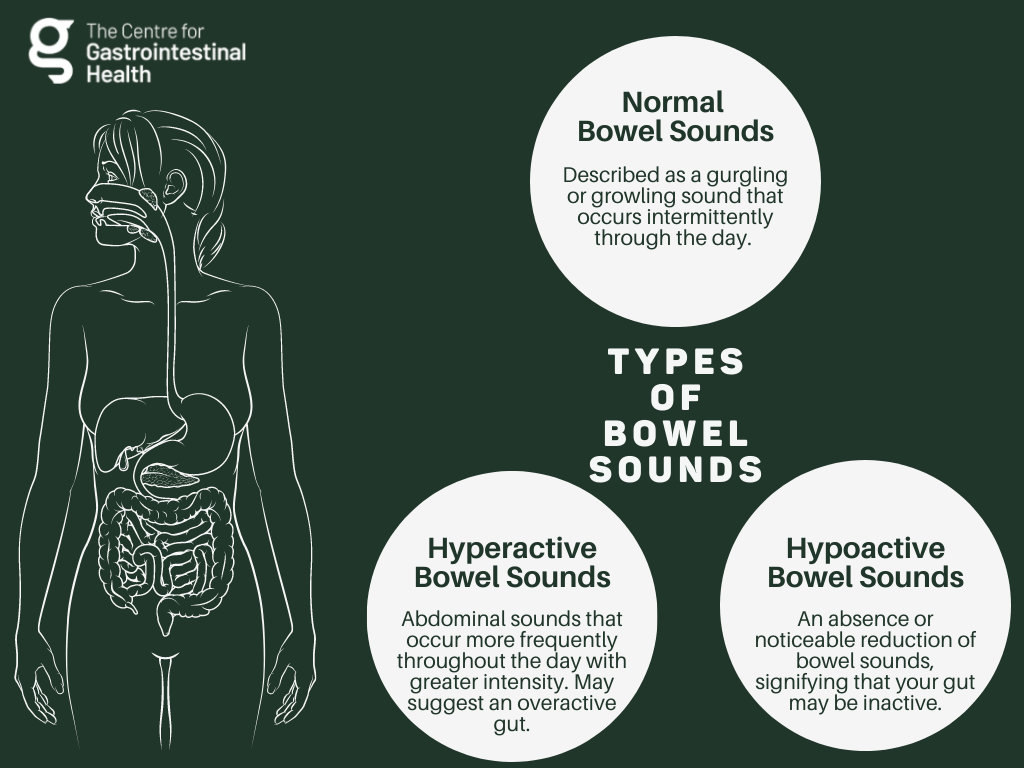 Generally, most bowel sounds are normal, simply signifying that your digestive tract is healthy. Normal bowel sounds may involve a gurgling or clicking noise that occurs throughout the day. It is expected, at times, that your bowel produces a loud gurgling noise for an extended period. This is known as a borborygmus, caused by moving gas or liquid through the bowel.

The regularity of your bowel sounds are an important measure when assessing your gastrointestinal health, as an absence or overabundance of noise may flag certain issues that will require medical attention.

Absent bowel sounds (hypoactive) indicate a reduced digestive system function, characterised by a reduction in the volume and frequency of noises emitted from your gut. A decrease in abdominal sounds can be concerning, as it suggests an underperforming or inactive bowel. Consequently, this can lead to an excessive build-up of waste in your body and cause serious harm.

People commonly experience diminished bowel sounds following abdominal surgery, as the intestines are temporarily traumatised following exposure to open air. Furthermore, anaesthesia used for any surgery can relax your muscles, leading to decreased intestinal activity and missing bowel sounds. We advise that you seek medical assistance if your bowel sounds haven’t returned 48 hours after your surgery.

Alternatively, the absence of bowel sounds can be caused by certain medications that you may be taking. In particular, pain medications containing opiates can relax the bowel tissue and reduce digestive activity.

If you haven’t recently undergone abdominal surgery or taken certain medications, your lack of bowel sounds could be an indication of:

We advise consulting a doctor if you have prolonged periods of diminished bowel sounds, especially if accompanied by abnormal bowel movements or severe abdominal pain.

If you have noticed a significant increase in the frequency and intensity of your abdominal sounds, you may have a hyperactive bowel. Commonly, this indicates that your bowel function is overactive due to increased muscular contractions of the small and large intestine.

During hyperactive bowel periods, you may experience other abnormal symptoms such as increased bowel movements, vomiting, nausea or abdominal pain. There is a range of gastrointestinal conditions or diseases associated with hyperactive bowel sounds.

It is important to note other symptoms, as hyperactive bowel sounds alone can be a normal part of your digestive process.

Other Symptoms with Bowel Sounds

To help you better understand what gastrointestinal disease or disorder may be related to your bowel sounds, we will identify symptoms of concern and their meaning.

Key symptoms to note with your bowel sounds include diarrhoea, gas and abdominal pain.

If you have noted increased bowel sounds alongside the presence of diarrhoea, you may have:

However, if you notice an excessive amount of gas expulsion (passing wind or belching), you may have an underlying issue. Hyperactive bowel sounds with gas include:

Various underlying conditions can cause a change in bowel sounds and abdominal pain. Your gut pain may simply be related to psychological factors like stress or anxiety. Alternatively, hyperactive bowel sounds with pain may indicate indigestion or food poisoning.

Potential gastrointestinal diseases or disorders connected with bowel sounds and pain include:

How to Stop Stomach Noises

You can take various measures to help limit the sounds emitted from your bowel. This includes avoiding any foods that may upset your stomach. For instance, if you have lactose intolerance, you should avoid dairy foods.

Furthermore, you can reduce your digestive sounds by eating slowly. Rapid consumption of foods can lead you to swallowing air, which will pass through the bowels as gas and consequently cause increased noise.

As stress and anxiety can lead to increased muscular activity, it causes bowel contractions which emits more noise. If you think your stomach growl is stress-related, try introducing relaxation methods, such as meditation. Alternatively, ensuring a full 8-hour sleep cycle is another effective way of reducing stress.

While these measures may help regulate your gut noises, it is important to note that bowel sounds are an entirely normal part of our digestive systems. Therefore, we shouldn’t worry whenever we hear our stomachs gurgle or growl.

Instead, you should check your abdominal sounds for any noticeable changes in activity and note coinciding symptoms, as this could signify a health concern.

When to See a Doctor

In the instance where you experience hypoactive or hyperactive bowel sounds with persistent symptoms of pain, diarrhoea, nausea, vomiting and constipation, you should consider seeking advice from your GP. Following a consultation with your doctor, they may refer you to a gastroenterologist if they think you may have an underlying condition that affects your gut.

The Centre for Gastrointestinal Health comprises an expert team of specialists, dieticians and anaesthetists who can help provide your diagnosis, treatment and ongoing management for chronic conditions.

For more information, check out the services we offer, or contact us today!